The Final Solution to Adolph Hilter

This may be a good place to introduce yourself and your site or include some credits.

Ben Hecht has been said to have worked on more classics in Hollywood’s Golden Age than any other Screenwriter. He worked alongside producer David O’Selznick in writing the screenplay for Gone with the Wind, although his writing was unaccredited in the film itself. 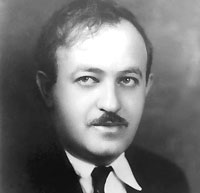 His name appears in larger than life letters in the opening credits to the movie, Farewell to Arms.

In 1961 he wrote the suppressed book Perfidy, which exposed Nazi – Zionist collaboration during World War II. The book begins with the 1953 trial of Michael Greenwald at the hands of David Ben-Gurion’s Israeli Government, a trial not publicized outside of the newly formed state of Israel.

Greenwald, an elderly Hungarian Jew, alleged in a few thousand mimeographed leaflets distributed in public cafes and market places that a prominent member of Prime Minister Ben-Gurion’s cabinet, Rudolph Kastner, had collaborated with high ranking Nazi, Kurt Becker, to block attempts to release Jews from concentration camps in Hungary as World War II was coming to an end.

(Note from website publishers: Thus, with tens of thousands of Jews rounded up and trapped in the concentration camps, they would die of starvation and disease as Nazi supply lines were cut by the Allies in the waning days of WW II. This scene of dead and dying concentration camp inmates are what Allied soldiers found and saw as they liberated the camps, and these scenes form the basis of the official “Hollywood version” of the Holocaust story. The “mystery” of why top level Zionists — the future founders of Israel — and top level Nazis were collaborating in this enterprise — was apparently never solved by Hecht, who expresses bewilderment at the end of the book. Prominent American Jews, such as Rabbi Stephen Wise, worked effectively to block several moves in Congress to negotiate the release of Jews from these Nazi camps before the end of the war. WITHOUT THE DEATH AND NEAR-DEATH BY DISEASE AND STARVATION OF AT LEAST TENS OF THOUSANDS OF JEWS LEFT IN THESE NAZI CONCENTRATION CAMPS, there would be no credible basis on which to build the “6 Million” story and the Hollywood version of “the Holocaust. In fact, those who survived were kept in captivity until powerful Jews from the United States and elsewhere could fly to Europe and pressure the surviving Jews to go to Palestine for the coming takeover, which happened in 1948. See the book or audio book, “Against our Better Judgement”, by Alison Weir.)

As the advancement of “on demand” publishing, and the internet, made it possible to bring almost any book back into print, Perfidy by Ben Hecht reappeared around the beginning of the 21st century. Its suppression from 1961 until almost 40 years later should interest students of the World War II period. More than one reviewer has stated that it was almost impossible to put the book down, as Hecht unfolded the true history of this little known trial and its earth-shaking implications.

The contents of this book were especially bitter for Hecht himself, who had the highest hopes for the new Zionist state, himself being an ardent fundraiser for the Irgun, the Jewish strike force which drove the British out of Palestine with acts of terror, such as the bombing of the King David Hotel under the direction of Menachim Begin, and which led the violent takeover of Palestine in 1948, expelling tens of thousands of Palestinians from their homes and lands.

NEW DEVELOPMENT: Now you can view both videos for free on this website. The Nazi-Zionist connection 3-hour Video (named on YouTube “The Rothschilds, Hilter, Holocaust, Israel, and Zionist World Government”) was banned in 11 countries in Europe and the Mideast by a French Judge. The back-story of the banning of this video on YouTube, along with comments from viewers, can be found by scrolling down a bit on our Nazi-Zionist Connection Page. — Paypal terminated our ability to take payments for these DVDs because we “were violating PayPal’s terms of use” — the specifics of which PayPal could not identify.